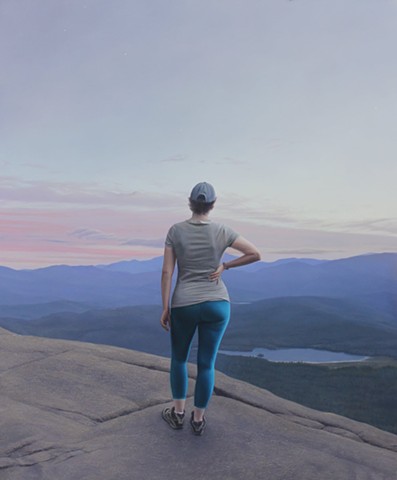 This painting is called "Survivor" and it will be part of October's (breast cancer awareness month!) show at RLS Gallery in Charleston.

" This oil painting is a solidified and varnished version of what was previously just one of those conjured mental images we create to anchor us in chaos. This particular chaos unfolded after the woman I love heard the words, "you have breast cancer". Once the weight of that has hit you hard enough, there are a lot of unknown terrible scenarios that enter your mind and an equal number of doctor appointments and tests to follow. It is a long and challenging road to say the least and the patient needs all the love and support they can get. As a caregiver and significant other, I needed to believe that things would be okay again. That this was all going to work out for her and that the pain from needles and surgery and the sickness and fatigue from chemo and radiation would eventually put one back where they most want to be, with the scourge exorcised by modern medicine. I pictured this, her back on top of one of New York's Adirondack peaks, feeling strong enough again to have made the climb and to take in the view, knowing damn well that she earned it more than anyone knew. I'm happy to report that she has since climbed two peaks and many more will follow. P.S. Although we climbed peaks together, this is still an invented image from a variety of sources. The departing pink clouds in the sky are the color paired with breast cancer, the mountain peaks cut a line across the chest and the five stars in the sky represent the five year mark many cancer survivors of all types hope to get to with no problems post treatment."